How do I explain to my child about death?

Begin by teaching your child that death is a necessary and inevitable part of life – This might include discussing ‘smaller losses’, such as the death of a pet or a plant. Such discussion lays the groundwork for a deeper, more painful loss when it occurs. It also lets your child know that is okay to talk about the painful feelings that death can bring.

Tell your child simply, but honestly, about the death – Depending upon the age of the child, choose words that are simple, age-appropriate but also straightforward. Be ready to honestly answer any questions that your child might have. A child has very keen senses and will sense that something is wrong, if you decide not to tell him and ‘spare’ him the pain. When a child senses your sadness but it has not been explained to him why you are sad, he is most likely to internalize the feelings of ‘something is wrong’. As a result, his anxiety levels will rise and he may see himself or his behaviour as the reason for your sadness. Prepare your child in advance by explaining to him what he will see at the funeral home and/or how the funeral/memorial service will progress.

Grieve with your child – This time gives you both a perfect opportunity to grieve together, to hold and comfort each other and work through some feelings together. It can be very beneficial for both of you. Your child may have feelings of guilt, that he somehow was the cause of the death. You will need to assure your child that this is not so. He did not cause the death nor could he have prevented it.

Avoid clichés or euphemisms when discussing death with your child – If you indicated the person ‘has gone to sleep’, your child may fear going to bed in that the same thing may happen to him. Even using the words ‘lost’ or ‘gone’ can plant the idea that the person who died will eventually be ‘found’ or ‘come back’. This can increase a child’s anxiety levels. It is perfectly all right to use words like ‘died’ or ‘dead’ to describe what has happened.

Questions children may ask – It is not unusual for children to ask the same questions over and over. They are attempting to process the information and to understand the finality of death. Answer your child honestly each time any questions are asked, even if the question is the same one asked again and again.

Children working through their feelings of grief – It may be helpful to put together a memory book together. Include notes, drawings, cards, feelings or other special items. Feelings can be expressed through play and even puppets – anger, guilt, sadness and maybe the realization ‘that all of the toys now belong to me and I don’t have to share them any more’. These are normal emotions that a child may experience. Try not to judge your child for any of these feelings. Like adults, children grieve in their own fashion, even brothers and sisters may grieve differently. Speak to your child again about the loss over the ensuing weeks and months. Don’t be shy about mentioning the deceased’s name and don’t feel your child will not have feelings if he goes several days without mentioning the loved one.

How do I tell my child about the death of his sibling and when is the appropriate time? – If you have a photo of your baby/child who has died, perhaps keep it in a prominent place in your home. You may refer to the photo from time to time and include the deceased child in some conversations. The photo invites conversation when your child/children wish to speak of him. The prompt of the photo encourages your child to speak of her deceased sibling when she wants or needs to and not when the parents may feel it is time to talk.

Some families celebrate special occasions by lighting a candle that will burn all the day long, as a memorial. Make your surviving children a part of these celebrations. Some choose to light a candle on the Birthday of the deceased child, the day he died, as well as meaningful holidays and any other occasion that may be special for your family. In this manner, from the beginning, all of your family is aware of this child and he or she can remain a part of the family. One family found a toy bear who was holding a wooden block with the letter ‘J’ on it, being the first letter in their deceased triplet son Joey’s name. This bear is included in each special photo so that Joey too, can be remain a part of their family.

Some families never speak of their dead child again. In these cases, this denial can cause additional pain and suffering beyond the actual loss. At age five years, twin girls both contracted the same disease. One survived and one did not. The parents removed all clothes, toys, photographs and possessions of the dead twin and she was never spoken of again. At about age 40, the surviving multiple, spoke of her tremendous sense of loss, isolation, confusion and pain as she was not permitted to speak her twin’s name nor was it fully explained to her why her sister had died. She spent many, many years feeling guilty for surviving the disease that killed her sister. She felt that her mother, in particular, blamed her for living while her sister did not. She felt she was less affectionate to her after her sister’s death. She advised she spent so much of her life ‘looking’ for her twin in crowds and on the streets.

Sometimes when we delay, postpone or deny the existence of our dead child, it is because we have not yet faced our own feelings regarding our loss. In such cases, it may be wise to seek some professional assistance in order to help fully address the issue.

Should your child be a part of the funeral arrangements? Depending upon the age of the child, you could ask him if he wishes to be. He may also wish to spend some time alone with his dead sibling or together with you. He may wish to help choose what his sibling will wear or which piece of music will be played at the service. For older multiple birth children, it is not unusual for them to have confided in each other as to what they would like to occur at their funerals. It may assist a co-multiple to be a part of the funeral arrangements and knowing decisions are being made that his co-multiple wanted. Being a part of the arrangements could be very helpful for a co-multiple in coming to terms with the finality of death. It may also be of help to you as you assist and support each other through this most difficult of times.

Be careful not to overdo it – It is good to speak openly and age appropriately with your child(ren) about death and to include them as much as possible in funeral arrangements. On the other hand, be aware of some possible pitfalls of a prolonged focus on the dead sibling within the family. Initially after the death, communication between you and your child(ren) may continue smoothly, but trouble may occur with an extended or continuous ‘over focus’ on the dead child. One family, for example, had shrines to their dead baby in two rooms of their home. The lost daughter’s name was mentioned almost daily as the parents continued to keep her as a current, ‘alive’ part of the family, even one year after her death. An older sibling would constantly bring home pictures of the family with the dead sister included in the drawings.

Although remembrance is important and helps to deal with death, it is also important not to idealize a dead child and make no distinction between them and a living child. There is a risk that siblings may feel that they cannot live up to the image of their dead sibling. While they grow and develop, with the ups and downs that this implies, their dead sibling remains forever ‘perfect’. This is a difficult situation for a child to live with on a day to day basis. They cannot compete with their dead sibling and may forget to get on with their lives through the normal growing stages.

Of course, this doesn’t mean ignoring significant anniversaries as a family, but parents need to be aware of the danger of not providing their living children with space and encouragement to live their own lives to the fullest. Indeed, living in the shadow of a deceased sibling can be a challenge for surviving children at the best of times. All the more difficult, however, if the parents refuse to truly mourn the loss of their child and, instead, establish the child as a permanent, living presence frozen in time.

“Always tell your children as much of the truth as they can understand, if only to establish the most valuable attribute you have as a parent: your credibility.”
– Stan and Jan Berenstain 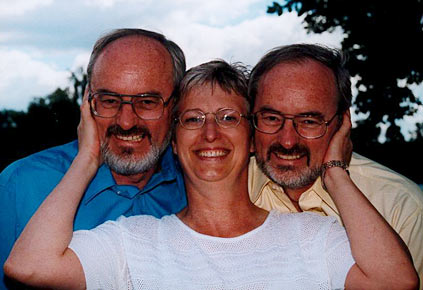