The cold words were a sharp slap across my face. This wasn’t what I needed or wanted to hear. I craved the warm, welcoming softness of a mother’s embrace – not these cruel words of betrayal.

Hiding in the garden within the shadows of the trees, I reminded myself that I had always walked in my twin brother’s shadow, trying to siphon off some scraps of the love that Mother showered him with. Why had I expected it to be different now?

Mother had never seen us as pair. My brother had always been her shining glory – I was just an unwanted extra that tagged along in the shadows. To the World, we had been two. But knowing that we were really one had given me the strength to stand firm.

But now he was gone. My mother had lost her favoured son, the one through whose eyes God smiled for her, and I had lost a part of my very self.

I tried hard to be quiet as I crept back into the house and upstairs. I didn’t want anyone to see “The One” as she had put it – the cursed one who had lived.

The events of the last few days swirled before my eyes. My brother was ill. I’d crept into his room and squeezed his hand.

“Let me share. We can fight it together,” I had chanted over and over trying to absorb his pain, trying to get him to wake up. He had tried to squeeze back, I know he had. Deep in my heart in the golden chamber that belonged to both of us – I knew!

But as I sat beside him, in walked our mother and she shoved me out of the bedroom. Her jealousy of me I had never understood. There was a constant wall between us and I had grown weary of trying to climb it. Mother resented the fact that my brother and I were a part of each other, co-multiple. She had always wanted him all to herself.,

He had hated her cloying love. His eyes mirrored his pain, when she pushed me aside. But we were children, powerless the way children are at that age.

Snorting and hiccuping, I crept into my twin’s room, which Mother had always shared with him. She had never allowed us to share a room in all of our ten years together. She had always tried to come between us. And now someone else had won. He had gone and I had no one with whom to share my hour of grief.

There on his bed lay his favourite green sweater. I picked it up and held it close. But is was just a piece of clothing – no warmth, not unconditional reassurance in its fibers. It was then that I knew that I was alone, so very alone and that my mother hated me.

The years have gone by and now I am fully grown and my mother his still never acknowledged my grief, as if to punish me for somehow being responsible for his death.

Mother had sent me away during the funeral. I never got to say goodbye. Never again got to squeeze his hand and let him know that I was there and that I loved him.

At sixteen, I ran away from home and have been alone ever since. I have no wish to put down roots and sometimes, when the loneliness is particularly overwhelming, I take out my most precious possession – a faded green sweater. A reminder that I, too, once belonged. 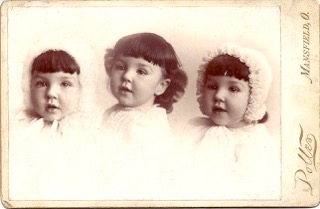